Bogotá is a city of many names – Athens of South America, Gotham of Colombia, Lady of the Andes – but nevertheless, frequently misjudged and vastly underrated as the most visceral of urban adventures here in Colombia. So many vacationers on the northern coast of Cartagena, wading the sapphire shores – so many nomads drinking and dancing amongst the tunnels and hills of magical Medellin… but much fewer getting their hands dirty in the sprawling authenticity of this Andean capital.

From the first breath, which will be alarmingly thinner than one’s usual, Bogotá has a unique air to it all the way through – defeating the norms you’ve come to expect in your worldly travels and bestowing ceaseless surprises around each cobbled alley. La Candelaria is where you’ll want to make your sojourn, Bogotá’s old town, and architectural marvel as if torn straight out of its literary magical realism. This neighborhood charm is unparalleled, descending from toppled hills towards the romantic Plaza de Bolívar and the myriad of museums cherishing South America history everywhere. Indigenous artifacts spanning thousands of years, the largest collection of pre-Columbian gold in the entire world, a strangely beautiful collection of artistic dedications to all things chubby, and so much more. In the likeness of Athens, this South American capital boasts a decadent throng of culture and history.

Speaking of the high altitude here, which ranges between 2,640m to 3,152m at its remarkable peak, all newcomers are warmly warned to delay their first hike up Monserrate for a couple days at the least… The altitude sickness, soroche can be severe for many visitors regardless of age, sex, or fitness level. But to avoid the tentative headaches, nosebleeds, dizzy spells, and/or insomnia there are tricks aplenty – hydrate and stock up like a camel, take your terrace power naps, and hunt the flea markets for coca leaves… the local tradition for a hardy climb. Brew into tea or chew the high-glucose remedy to alleviate symptoms while navigating the sundry ascents and descents.

Bogotá’s grittier reputation rises from the south and southwest corners of the city where drugs and crime are still quelled on a regular basis. But thanks to decades of military efforts these dangers are diligently kept far from the cultural splendor enjoyed in the heart of the city – thankfully no longer a concern for travelers or locals of the city at large. The military presence itself, the sound of which may conjure concerns of yet more danger, proves to be a blessing for most residents. Sights of jungle fatigues and heavy machine guns at almost every corner block may seem alarming at first glance, but the conscientious soldiers are most often full of smiles and guidance when approached for information. If, on the other hand, Colombia’s National Army intrigues you in its stirring history of cartel firefights and revolutionary triumphs – the Bogotá Military Museum on Calle 10 #4-92 is an essential stop, as well as exploring the many military gift shops below the president’s Casa de Nariño. 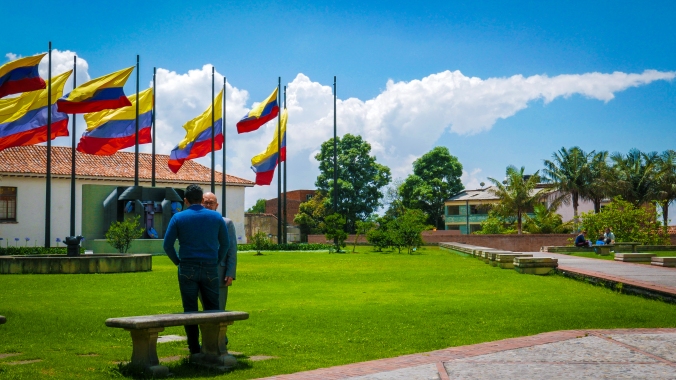 Look past the misread, rustic repute of busy Bogotá or Colombia’s Gotham, and you’ll see the Lady of the Andes, a cradled city amongst the clouds glowing with urban magic in the coolest of Colombian winds. In the Chibcha language of the Muisca Indigenous inhabitants of the region, it was founded as Bacatá, which translates fully to The Lady of the Mountains that Shine. Bogotá is often overlooked, but when travelers seek another world, far distant and diverse from their native country, they will find their own El Dorado here amidst the myth and legend. It is unblinkingly real, time in a bottle, and the most authentic home of the Colombian spirit.

2 thoughts on “Lady of the Andes: Bogotá”